Anu Manchanda, senior gemmologist for AnchorCert Gem Lab considers the factors that affect the quality and value of a sapphire 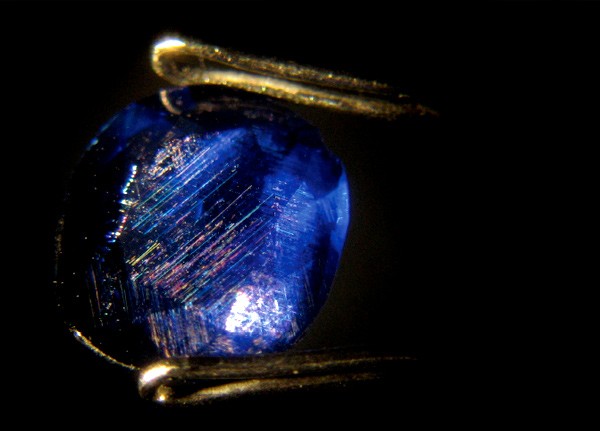 In a surprise twist to a long awaited Royal engagement, Princess Diana’s iconic engagement ring is firmly back on public view on Kate Middleton’s fourth finger. The jewellery industry anticipates a sales opportunity to be exploited and the massmarket copycat versions are readily available

History
The first sapphire probably appeared in ancient Rome from Sri Lanka, after a hazardous journey along the trade routes of India. Ever since then blue sapphires have always been one of the most sought-after and valued gems. Traditionally there was a belief that sapphires had restorative powers, which could clear the mind and skin, cure fevers, colds and ulcers and even work as an antidote for poison. In modern times blue sapphires are chosen more for their visual qualities and their rich glowing colour, which is complemented by diamonds and precious metal, to successfully create designs from classical to contemporary.

Colour
Blue sapphire is a member of the mineral species ‘corundum’, the other important members being ruby and other sapphires, which are virtually every colour of the rainbow. The blue sapphire occurs naturally in a wide variety of shades ranging from pastel cerulean to richly saturated cobalt blue. The blue colour is caused by trace elements of iron or titanium. The most sought-after, and therefore most valuable colour is velvety violet blue to blue, in medium to medium-dark tone.

Source
The most famous historical sources of sapphire are Kashmir, Burma and Sri Lanka, but in recent decades Madagascar, eastern Africa, Australia, Thailand and Cambodia have also become important sources.

Formation and cut
Blue sapphires found around the world originated in either metamorphic or igneous/ basaltic conditions. Metamorphic deposits are mostly primary deposits, which occur when sapphire crystallises due to changes in temperature, pressure and chemical composition. They are usually found in marble, schist or gneiss. Basaltic sapphires are those found in volcanic deposits from when the crystal was engulfed by the lava and retained as an inclusion in the resulting igneous rock. They are secondary deposits, as the sapphires have not originally formed in the lava.

The blue sapphires are usually cut in cushion and oval shapes with brilliant-cut crowns and step-cut pavilions to expose their rich colour. They may also be cut into trillion, emerald, pear, and marquise shapes. Clarity
Blue sapphires typically have some inclusions, and sapphires with extremely high clarity are rare and very valuable. Inclusions generally seen are rutile needles called silk, boehmite needles, included crystals, fingerprint inclusions, growth zoning, and colour banding and zoning. When the rutile needles are present in abundant quantity and are aligned in a way that needles intersect each other at varying angles, they produce a phenomenon called asterism or star sapphire (seen below). The stone needs to be cut en cabochon to bring out this phenomenon 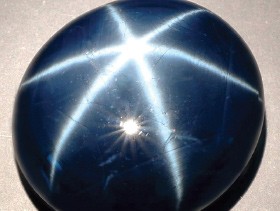 Sapphire treatment
As much as 95 per cent of the gem quality sapphire in the market today is treated in some way to improve its apparent quality. These treatments range from relatively simple techniques to more advanced methods as given below. It is generally accepted that blue sapphires have been heat treated unless stated otherwise. Other treatments need to be disclosed, according to the CIBJO Blue Book, which sets out international standards for coloured gemstones.

Heating: Mostly low temperature heating was used up to the 1970s, but in modern times temperatures can range from 850°F to 3,500°F to improve the colour and also clarity by melting the rutile needles.

Heating with fissure healing: This involves heating the gem in the presence of a fluxing agent. The flux melts due to the heat and the residue fills the fissures and improves the clarity as well as the colour.

Heating with ti-diffusion: The diffusion of titanium gives a thin layer of colour to the surface of the gem. This treatment has been available since the mid- to late-1980s. Heating with be-diffusion: In 2001 this treatment took the industry by surprise as beryllium was used with higher temperatures and longer time for diffusion treatment. The result was a colour penetrating the entire depth of the stone making the treatment much more difficult to be identified.

Oiling: An old enhancement method of filling the fissures with oil or a similar substance to reduce the visibility of fissures thus improving the apparent clarity of the gem. Fracture filling: Cobalt blue glass is being used to fracture fill low-grade sapphire to improve the apparent clarity. Cobalt coating: Occasionally blue corundum can be treated by an amorphous coating of aluminium and cobalt. This treatment can be easily identified.

Imitation sapphire
Two materials have been commonly used to imitate sapphires; blue glass and blue spinel. Also doublets made with a pavilion of synthetic sapphire and a crown of natural sapphire have been used, with stones being set in a bezel setting to hide the junction plane.

Synthetic sapphire
The first synthetic sapphire was produced in 1902 by a French chemist using the flame fusion method. This was not a very sophisticated process and a trained gemmologist can easily distinguish a flame fusion synthetic sapphire from a natural sapphire. In the 1960s the flux grown sapphire came into the market, followed by ‘floating zone’ and hydrothermal processes. These synthetics are not as easily identifiable and advanced laboratory testing may be required to differentiate them.

While we can already see a resurgence of the classic sapphire and diamond ‘Princess Di’ cluster, we’re also looking forward to seeing modern contemporary interpretations of sapphire engagement rings for brides of the 21st century.