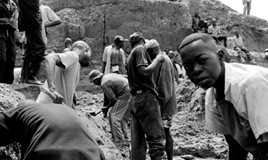 Environmental and humanitarian issues are of increasing concern to the consumer. Many are now seeking reassurance that the goods they are buying have been produced in a responsible manner and that the people involved in the supply chain have not suffered in any way.

This is of particular concern to many when buying high value luxury items as an expression of love and commitment. It is true that in the past “conflict diamonds” have been a source of revenue which has funded civil conflict in countries such as Sierra Leone and Angola. This problem was recognised in 1998, following a decade of violent conflict in the continent of Africa. Concern from non government organisations such as Global Witness and the jewellery trade itself resulted in a United Nations resolution in 2000 and the establishment of the Kimberley Process in 2002. The Kimberley Process has been adopted by 68 governments worldwide and regulates all rough diamonds. It is now estimated that only 1% of the annual production of diamonds are traded outside the Kimberley Process. All responsible UK retailers will require that diamonds have a Kimberley certificate to ensure that they are not conflict.

The mining of diamonds and gold employs millions of people in the world’s poorest areas, particularly in Africa, and in India a further 700,000 are employed in the diamond cutting industry. It is crucial to the survival of these people who in most cases have no alternative source of employment or income. The Western consumer spend on gold and diamonds is keeping millions alive. If this spend should fall for whatever reason it would have severe consequences for many communities and cause untold suffering for the people of Africa and their families This particularly applies to those in areas where long term conflict has devastated the economy and the population are struggling to recover and survive..