The practice of hallmarking dates back 700 years in the UK. It is widely understood that the small row of characters stamped onto each precious metal article carries a wealth of information for those who know how to crack the code. But interpreting the hallmark is only possible if the small marks are intelligible, and this depends on a well made punch and a well struck mark, of an appropriate depth. Although laser marking has been an option since 2000, the majority of hallmarks are still struck using a traditional punch.

The basic principles of creating a punch with which to strike a good, clear hallmark have not changed over the last seven centuries. A suitable metal ‘blank’ must be fashioned, with a distinct tip, suitable to carry the required impression. This may be just one of the hallmarking symbols or all of them in one combination punch. The exact shape of the blank will depend upon whether the punch is to be used by hand or in a press, and will also be influenced by the type of article it is intended to mark. While most punches are a straight rod or bar, ‘cranked’ punches designed specifically for marking inside rings are also common. 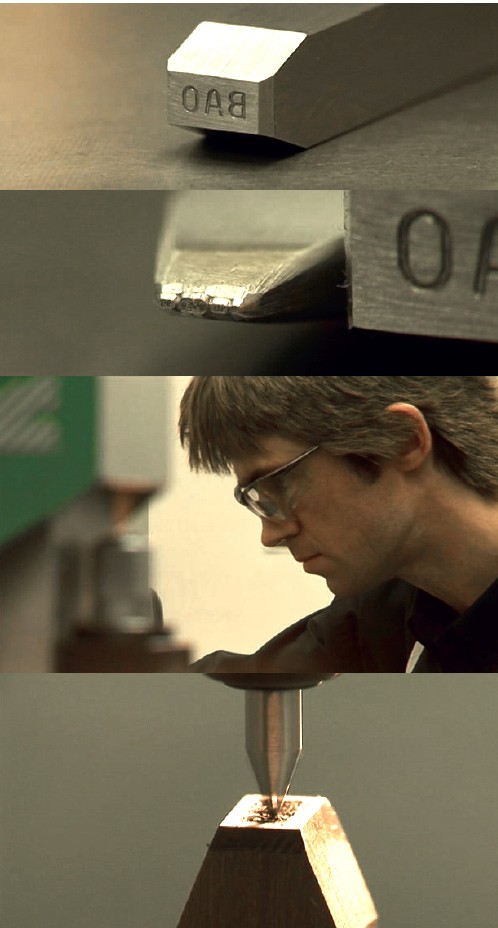 The composition of the steel alloy from which the punch is made will vary according to the preferences of the maker and its intended use. However it must be soft enough to accept an engraving or other kind of impression and to be shaped and finished by chisel or file. It must also have the capacity to harden significantly when heated to between 600°C and 800°C, to make it sufficiently tough to strike a clear mark without undue pressure, which could damage the article being marked.

Once the appropriate blank has been obtained, the characters comprising the hallmark are applied to its tip using a variety of techniques, which have varied through the ages. The punch is then subjected to intense heat treatment. As soon as the punch reaches the requisite temperature it will be ‘quenched’ by plunging it into either water or oil. The dramatic drop in temperature causes the alloy to harden, creating a durable punch which can be used time and time again without losing its precision. 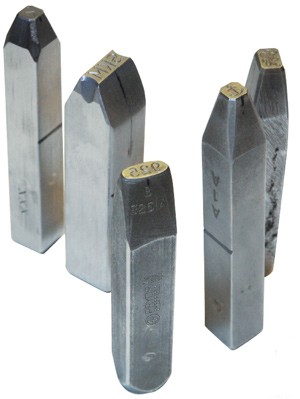 In the early days of hallmarking, punches were made by engraving or chiselling into the blank and using a file to remove the excess metal to create the appropriate surround shape. Over the centuries technology has improved, and by the second half of the 20th century punch makers were commonly using a pantograph – utilising a technique based on creating a mould for the punch and then cutting away the unwanted metal to create the hallmark. These machines had the benefit that the moulds could be scaled up or down in size to create different sized punches from the same initial mould.

In the 21st century most punches are made with the use of CAD/CAM software to create the impression of the mark, and either a computer numerical control (CNC) or laser machine to transfer the image to the tip of the punch.

The Birmingham Assay Office invested in its own punch-making facility in 1996, initially using CNC. The punch engineers start by creating a two dimensional image using CAD/ CAM software, and the operating programme in the CNC translates this into a 3D specification, which also includes the depth of the mark. Once the programme is ready to run, the punch makers have to grind special ‘cutters’ to cut in the mark. The hallmark itself has to be very precise, now sometimes being as small as 0.25 millimetres, and the tip of a cutter is finer than a human hair.

Once the cutters are ready the engineer has to carefully set up the machine. Cutting a punch can take anything from 30 minutes to half a day, and has to be closely supervised as the cutters are very fragile and may break during the process, requiring urgent remedial action. Cutters will only last for one use and then have to be discarded and the whole process started again.

The CNC process is still in wide use and creates high-quality punches, but obviously has its downsides due to the fragility of the cutters. As technology has moved on, the Birmingham Assay Office has upgraded its equipment and is now making the most of its punches using a state-of-the-art laser machine. The same preparation and finishing of the punches is still required, but the impression of the mark can be much more reliably applied. 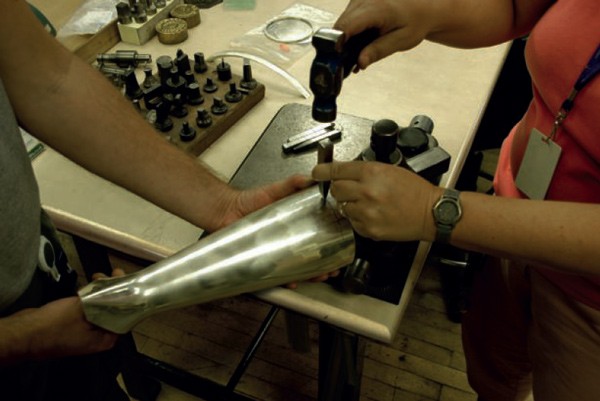 As with all specialist equipment the new kit has taken some time to pioneer and develop. Andy Left and Luke Abbey pride themselves on supplying their colleagues in hallmarking with high-quality, sharply-cut punches, in order to deliver a clear intelligible hallmark. They have both undertaken days of specific training and developed new expertise in order to maximise the benefits of the new technology. Both engineers are now extremely confident in the results from the laser machine, which has also speeded the process up and made it more reliable and less labour intensive.

Andy says: “Having our own punch-making facility is a great advantage to our customers as we can create new, high-quality punches very rapidly. If a punch should become too worn or be damaged we can replace it immediately, preventing any unnecessary delays to hallmarking.”

Once the punches have been made, a unique reference code is stamped into them. Whatever the punch carries, be it just the initials of the sponsor mark or the full hallmark, the punch will be used to strike one mark onto the appropriate registration plate. Such plates have been kept by Assay Office Birmingham since it opened in 1773 and they chronicle the tens of thousands of famous and unknown jewellers, goldsmiths and silversmiths who have registered at the Office over the past 235 years. If the authenticity of a mark should ever be questioned it is referenced against the plate to try to establish whether it is genuine or not.

Andy heads up the punchroom and also the tool room, which makes the dies and jigs required to support articles while they are being hallmarked. Andy is qualifi ed in mechanical production and CNC engineering, welding, jewellery manufacturing and computer aided design (CAD). He has over 25 years’ experience at Assay Office Birmingham.

Luke undertook a modern apprenticeship in engineering following his BTeC in Mechanical engineering and both engineers have undergone extensive in-house training in relation to the new laser equipment.