Jade is one of nature’s wonders and has always been highly prized in Asia. Its first use, more than 5000 years ago, was initially for weapons and tools before it gained status as an aspirational gemstone. ANU MANCHANDA explains how experts go about identifying it.

Jade’s natural lustre and many beautiful colours are very attractive with a full rainbow of shades from yellow to violet with myriad shades of green. The major source of jade is Burma, but China is often called ‘the Jade kingdom’ because it is seen as a symbol of the good, the beautiful and the precious. However, as with all gemstones enhancements and synthetics are rife and gemmologists need sophisticated equipment to be sure they can identify pieces correctly, particularly for mounted stones. 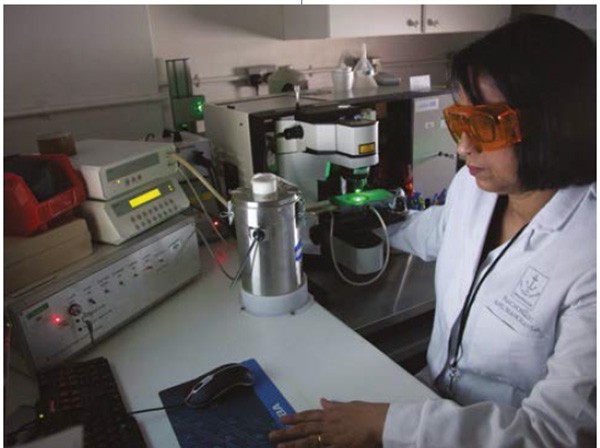 There is a steady flow of older pieces of jade being repurchased from auction houses and repatriated to China, and gemmologists in the AnchorCert Gem Lab at the Birmingham Assay Office regularly see jade items coming for assessment. These are usually bangles, loose cabochons, or cabochons set into pendants or rings, strings of beads and/or pieces of jade fashioned into carvings and statuettes.

In the western world, too, jade is actively sought for its appearance, mystique, and romance surrounding it. The jade trade has resurfaced in recent years and is becoming a booming business.

THE IDENTIFICATION PROCESS The first task is to identify what type of jade it is. French mineralogist Damour found that jade consisted of two types of minerals and named them as nephrite and jadeite; these were further translated as ‘soft jade’ and ‘hard jade’ respectively based on the physical hardness of the two varieties. Both are poly crystalline with nephrite being a silicate of the amphibole mineral series, showing a compact fibrous texture and greasy lustre. It is by far the toughest rock in existence even tougher than jadeite. By contrast jadeite is granular to fibrous, an interlocking mass of sodium aluminium silicate (Na Al Si2 O6) within the pyroxene group mineral, showing a vitreous lustre. The Chinese name for jadeite is ‘Fei Cui’ after the name of a bird which has green feathers.

Jadeite is the more favoured variety available in green, white, purple, black,yellow and red colours with green being the most sought after colour. The most expensive being strong colour hues, particularly a deep green, and a transparent stone, free of inclusions.

Gemmologists can potentially differentiate between nephrite and jadeite using standard gemmological tests such as hardness, refractive index, specific gravity and, most important of all, visual examination through a loupe or a microscope by an experienced eye; if they are small loose objects. However, if the jadeite is set in a piece of jewellery or is too big to be tested on the standard gemmological equipment then they need to be tested on specialised equipment. AnchorCert Gemmologists use the Raman Spectroscope to separate nephrite from jadeite. AnchorCert Gem Lab is the only gemmological laboratory in the UK with this sophisticated piece of equipment.

As with so many gemstones there are a multitude of different treatments which it can undergo in order to enhance its apparent quality. Full testing for the various ‘improvements’ is impossible without some highly specialised equipment. Gemmologists have to test pieces carefully to ensure if the appearance of jade has been improved by bleaching, dyeing or impregnating it with polymers.

These three techniques may be used individually or together to improve the clarity, remove coloured flecks of iron oxide or boost the colour to a more attractive, deeper tone. Based on these treatments Jade has been classified as follows:
Type A – Natural with no artificial enhancement.
Type B – Chemically bleached and treated jadeite and polymer impregnated.
Type C - Dyed Jadeite. IDENTIFYING JADE A DAY AT THE OFFICE identifying jade  -  The jade trade has resurfaced in recent years and is becoming a booming business Jade is one of nature’s wonders and has always been highly prized in Asia. Its first use, more than 5000 years ago, was initially for weapons and tools before it gained status as an aspirational gemstone. ANU MANCHANDA explains how experts go about identifying it June 2015 | jewelleryfocus.co.uk JEWELLERY FOCUS 43 Type B + C – Dyed and polymer impregnated Jadeite.
Type D – Jadeite Doublets (Green jadeite top and clear plastic backing).

All are recognised processes but must be disclosed as they impact the price. These treatments can be identified by using two further pieces of equipment the FTIR (Fourier Transform Infra Red) spectroscopy and UV-Vis spectroscopy. These instruments look at the infrared and visible part of the spectrum respectively and the resulting spectrographs will indicate whether the jadeite is untreated or whether polymers have been added to improve its clarity and/or are dyed to improve its colour.

The General Electric Company produced synthetic jadeite material in the late 1970s as an experimental material. The synthetic material has no commercial relevance at

the present time; it is difficult and expensive to create. We don’t know whether similar material will be produced in future for commercial purposes. Furthermore, it can be easily separated from natural jadeite by using the infrared spectroscopy and specialised jadeite filters. 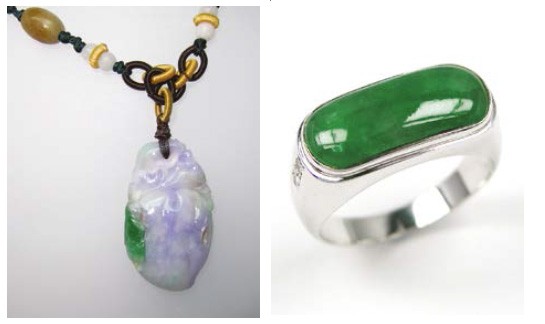 However, there are several alternative similar looking stimulants being sold in the market as jadeite. Standard gemmological tests such as checking the Refractive Index and Specific Gravity will identify most of these materials. These include serpentine, aventurine quartz, amazonite, dyed agate, dyed quartzite, calcite, bowenite, chalcedony, chrysoprase, saussurite, hydrogrossular garnet, green glass, steatite and marble to just name a few.

Two other pyroxenes can be mistaken as jadeite which are omphacite and kosmochlor. In omphasite the sodium is replaced by calcium and in the latter the aluminium of Jadeite is replaced by chromium.