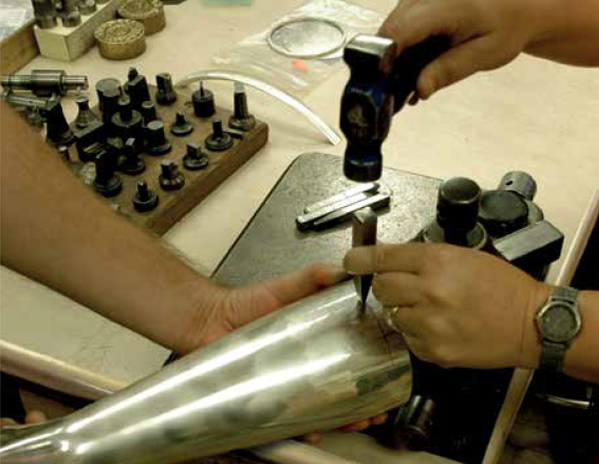 One of the earliest forms of consumer labelling, hallmarking holds a fascinating history as well as a practical purpose. This month Assay Office Birmingham looks at a day in the life of its hallmarking oracle, registration clerk Lin Moran.

There has been a lot of media noise about misleading labelling recently, and consumer confidence in the food industry has suffered significantly as a result. While the jewellery industry is not (yet) in the habit of carrying out DNA tests on its gold and other precious metal articles, it can proudly claim its rigorous hallmarking system as the earliest form of consumer labelling.

Hallmarking legislation has seen many changes since its inception in the 14th century, but the three symbols that remain a statutory requirement for all articles above the exemption weight still tell an important story. The town mark indicates which assay office has tested and hallmarked the item, and the fineness mark guarantees the precious metal content in line with one of the recognised standards. It is a simple code: the shape of the fineness mark dictates the metal and the fineness is expressed as parts per thousand, with the most common standards being 375 gold (nine carat), 925 silver (sterling), and 950 palladium and platinum.

The other compulsory mark is the sponsor mark, which indicates who submitted the article for hallmarking, providing complete traceability as to the origin of the article. This simple combination of two or three letters, contained in a specific shield shape, has to be registered with the Assay Office and is unique to that customer. This device, which has been used for 650 years, is a hugely informative product label, providing reassurance to retailers and to consumers.

The discreet hallmark bearing the initials of a current high volume retailer may not appear to add actual value to a piece, but a Boulton and Fothergill mark on an 18th century candlestick or a Nathaniel Mills mark on a 19th century card case can increase the item’s value significantly, because it proves its provenance. Additional marks – particularly the date letter, which is now optional – complete the story.

A robust, centuries-old system like the sponsor mark only has value because it has been strictly controlled by the assay offices and its integrity fiercely guarded. At the Assay Office, this is currently the task of Lin Moran, registration clerk. Lin has responsibility for registering new customers, advising existing customers that their registration is due for renewal (every 10 years), and helping both the trade and the general public to identify old Birmingham hallmarks.

It is not a job for the faint hearted. Hefting the old leather-bound registers in and out of their fireproof safe is better than any gym session, and registering new customers requires much more than filling out a form. Lin uses her unique expertise and knowledge of hallmarking to ensure that customers are satisfied with their all-important mark.

Lin’s role requires her to guide new customers through the selection of their sponsor mark shape and their punch. Using her experience of the hallmarking operation, where Lin worked prior to taking up her position as registration clerk, she will advise customers on the best size of hallmark punch to select. Hallmarking inevitably causes some displacement of metal and Lin will base her advice on the construction and thickness of articles to be hallmarked. An over large punch could cause an unacceptable ‘bulge’, even if there is space for a relatively large mark on the article. The type of product to be marked is obviously significant, as some articles only have space for a mark as small as 0.5 millimetres high, whereas at the other end of the scale silversmiths still use a large ‘spread’ hallmark, which could be several millimetres high, as a feature of the product.

Many people like the idea of a decorative ornate hallmark, but Lin will advise against this where the items to be hallmarked are particularly small. The hallmark needs to be legible when examined through a 10x loupe, and so a simple shape, allowing the letters to be as large as possible, is usually recommended.

Having selected the appropriate sizes of punch, the shape is also a consideration. Punches to be used for rings have a ‘cranked’ neck and a slightly rounded head to allow the mark to be struck cleanly inside the curve of the ring. Where a wide variety of product is to be presented for hallmarking, a variety of punches may be required.

The punches are all made in-house at the Assay Office by skilled engineers who liaise with Lin to ensure they meet the customers’ requirements. Once they are ready for use, the punch will be numbered for identification and the mark actually struck onto a brass plate for the archives. Every single punch ever registered at the Assay Office is recorded in this way, creating an accurate impression of the mark that will not fade or deteriorate, and which is a long-term point of reference to identify the mark in the future. If a ‘hallmark’ is suspected of being cast or counterfeit, a check against the detailed impression on this plate will often prove it conclusively.

Once made, the sponsor mark punch is the property of the customer, who may choose to keep it and strike the sponsor’s mark him or herself, prior to sending the article for the rest to be applied by the Assay Office, or submit it with the work so that the Assay Office can ensure that all of the marks are correctly aligned and struck to the same depth. Alternatively, the Assay Office is happy to store it until it is required, keeping it in its own location alongside thousands of others.

As well as assisting registrants,  Lin helps members of the trade and the public who are trying to identify old Birmingham marks. This requires identifying the sponsor mark and tracking down the original registration from the vast ledgers housed at the Assay Office. The first 85 years of Birmingham sponsor marks are available at www.assayofficeuk.com/esh but the number of registrations increased significantly after this and trying to recreate 240 years of detailed archives is a huge task. For now, Lin is the all-important ‘search engine’ for Assay Office Birmingham, looking after thousands of live registered sponsor marks, and literally hundreds of thousands of past ones on a daily basis.

Lin Moran joined the Assay Office 18 years ago, initially as a production operator within the hallmarking area. When laser technology was introduced for hallmarking purposes, Lin transferred to the new laser facility in the late 1990s where she spent a number of years. Her experience within the hallmarking operation enabled her to move into the role of registration clerk when the then postholder, Ruth Moore, retired after 50 years of service with the Birmingham Assay Office. During a handover that lasted several months, Lin had the opportunity to learn and benefit from the huge amount of knowledge and experience that Ruth had acquired over many years in this important role.