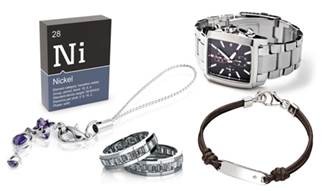 Nickel has been regulated in jewellery, watches and many other articles since 2000. This is important consumer protection legislation as sensitisation to nickel, often resulting from a high nickel release rate from a post assembly worn in a body piercing,  can cause severe, disabling allergic reactions.

The changes to the Nickel Release test EN 1811:2011 prescribed by EU Legislation under the REACH Regulation, caused consternation throughout the jewellery and watch industry when they became enforceable. While the method was improved by standardisation of some significant variables during the testing procedure, the method of calculating and reporting results was a major cause for concern.  The consequence was that many materials and alloys that had previously been acceptable were now non-compliant, causing manufacturers, importers and retailers huge problems.

As shown in the table below, the replacement of the original adjustment factor of 0.1 with a measurement of uncertainty, essentially meant that the permitted nickel release level was significantly reduced. However, the change which caused the most difficulties was the procedure for reporting results which left release levels between two specific thresholds as a “no decision” category. The low levels meant that some retailers were accepting items in the “No decision” categories as they were not specifically a “Fail”, whilst others would only accept a “Pass” and the situation became very confused.

Despite strenuous lobbying by Assay Office Birmingham’s laboratory division, AnchorCert Analytical, which has specialist expertise in Nickel testing, the amendments were voted through the EU. When enforced in the UK in 2013 they met strong opposition from the jewellery and watch industry in the UK and throughout the EU.  Assay Office Birmingham continued to lobby, providing technical support to an initiative by the British Jewellers’ Association and also heading up an objection from CIBJO the World Jewellery Confederation. An international resolution from the 2013 CIBJO Conference in Tel Aviv reinforced activity at a national level to abandon the “No decision” category and to seek a compliance level of 0.88 micrograms cm squared per week for articles intended to come into prolonged and direct contact with the skin and 0.35 micrograms squared per week for post assemblies.

Nearly two years later, after sustained campaigning and re-consideration by the CEN Working Committees, these changes have been formally proposed for adoption by the National Standards Bodies who regulate standards.  For the UK this is BSI and the amendments to the standard are open for public consultation until 5th May 2015. Even now this long fought battle can only be won by positive support from the industry. Please confirm your approval of this amendment by registering and commenting at https://drafts.bsigroup.com/.

Interested parties outside the UK should contact their own National Standards Bodies who should have a similar public consultation open for comment. Please take the time to ensure that this very unsatisfactory standard is amended to become the important consumer protection standard it should be.

For more information on Nickel testing or any other testing services contact AnchorCert Analytical on +44 (0)121 262 1017 or email testing@theassayoffice.co.uk

Hope competition winner enjoys an exclusive behind the scenes tour of the Birmingham Assay Office.

Birmingham Assay Office to screen for laboratory grown diamonds as part of their jewellery valuation service.