Anu Manchanda of AnchorCert Gem Lab focuses on the beauty of the pearl, and discusses the different characteristics of natural and cultured varieties. 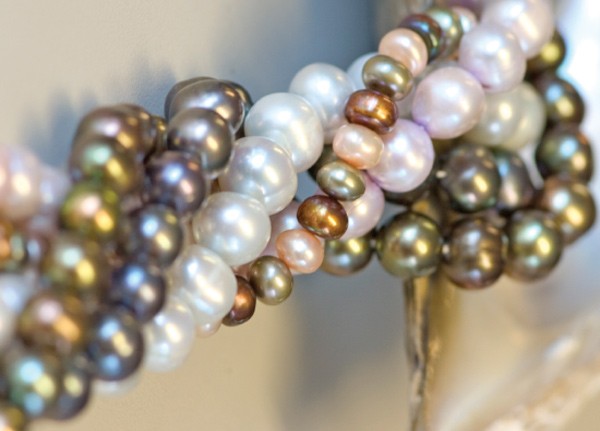 Pearls were one of the first natural gems to be appreciated and sought after, due to their beautiful natural lustre. The process by which a mollusc creates a pearl is one of the miracles of nature, and even though the majority of pearls on the market in the 21st century have been the subject of some human intervention, their creation still depends upon a natural process.

Pearls are formed in various different species of mollusc, living in both saltwater and freshwater. They occur when the mollusc is invaded by a foreign substance such as a small piece of grit washed in by the sea. At this point the mollusc will immediately start to build natural defences around the intruder. These comprise layers of nacre, which is mainly calcium carbonate, crystallised into aragonite. The layers of aragonite are held together by layers of natural ‘glue’ called conchiolin.

There are still natural pearls in circulation but these are in limited supply as over-fishing, pollution and intervention by man destroyed many of the molluscs’ indigenous breeding grounds in the second half of the 20th century. The dwindling supply and rarity mean that a good specimen of a natural pearl can command a very high price.

Pearls have surged in popularity in the last decade, and there is now a wide range of options on the market from completely artificial simulated pearls, which may still be very attractive but of little intrinsic value, to high quality cultured pearls, which are far more expensive as they have still been created by a natural process, but with some human intervention.

Akoya cultured pearls: Mostly cultured in China and Japan. Akoya pearls are white or cream with a hint of rose (pink) or green, and are rarely larger than nine millimetres.

Tahitian cultured pearls: Produced in colours like eggplant purple, peacock green, greyish blue and metallic grey with oysters native to French Polynesia. These pearls can grow as large as 30 centimetres and can weigh up to five kilograms. South Sea cultured pearls: These come from the world’s largest molluscs in silver, white and yellow (golden) colours. These are usually farmed in Australia, the Philippines and Indonesia.

Freshwater mussels can produce more than one pearl at a time and so multiple implants will produce several cultured pearls from one mollusc, making the pearls less expensive.

Pearl Treatment
Although cultured pearls are created by human intervention they are formed by a natural process and may still be imperfect. Cultured pearls have unwanted colour or surface characteristics, which can lower their value. These pearls are treated to make them more attractive and more marketable. Various different treatments are applied: Bleaching to create a uniform colour is a common practice.

Dyeing: pearls are usually darkened by using silver nitrate solution and subsequent exposure to light or hydrogen sulphide gas. This gives the pearls a rich black colour. Pearls can be soaked in red dyes to give them a pink tint; a process called pinking.

Irradiation with gamma rays can produce a very dark blue-grey to black colour, sometimes with a very attractive metallic iridescence in freshwater cultured pearls, and grey to blue body colour in saltwater cultured pearls. Irradiated pearls do not have any residual radiation, but the colour change may have varying degrees of stability.

Lustre: enhancement treatment is carried out by applying a shiny coating to the pearls. This treatment is not very successful, and is therefore uncommon. Pearls can be ‘worked’ to change or improve the shape. This can involve cutting or grinding away part of the nacre.

Detecting pearl treatment
Correct identification of pearls and possible treatments is essential as it has a significant impact on the value of the pearl. Detection requires basic visual observation and also complex tests, which require an experienced gemmologist to use sophisticated laboratory equipment and then apply their expertise and knowledge to interpret the results. The main features a gemmologist would use to assess a pearl are listed below: Visual observation: very uniform colour indicates treatment; concentration of dye at drill hole; high magnification to look for lustre-coating.

Separating natural and cultured pearls
Blink test: By holding the strand near the front edge of a strong lamp and rotating it to see if the pearls blink from light to dark as they are turned. If they do, they are cultured. Candling: The pearl strand is rotated with strong light shining through them and looking for curved lines and stripes. These are the growth layers of the shell beads, and separate beaded cultured pearls from non-beaded or natural pearls.

X-radiography: X-ray images can show the internal structure of the pearl, and hence separate cultured pearls from natural pearls. X-ray diffraction: Beams of X-ray produce different patterns in natural and cultured pearls, which are called Lauegrams. X-ray fluorescence: Saltwater natural pearls are mostly inert but freshwater and cultured pearls mostly fluoresce greenish-yellow to X-ray. As with all areas of gemmology this is not a static situation and new sources, varieties and treatments continue to appear, meaning that jewellers and gemmologists alike need to keep up to speed with the latest developments to be sure they really know what they are looking at.