The process of transforming an unattractive rough diamond into a glittering polished diamond is known as manufacturing, and the skill and finesse with which this is done can make a major difference to the appearance of the final gemstone. Anu Manchanda, senior gemmologist at AnchorCert Gem Lab, explains the basic processes. 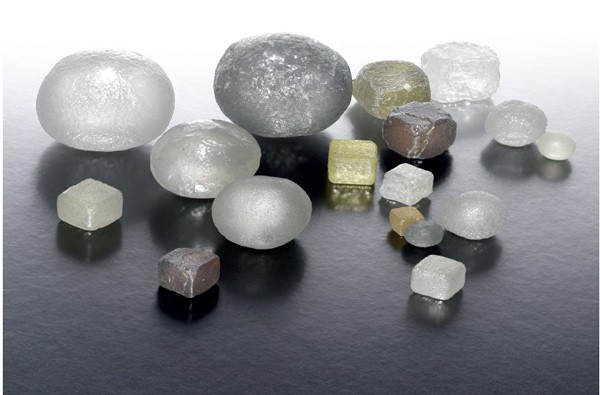 Diamond is the hardest known substance with a hardness of 10 on the Mohs Scale of Hardness. In spite of this it can be cut and polished due to the phenomenon of differential hardness – ie the hardness differs slightly with different directions in certain gem materials. However, a diamond can only be cut by another diamond. Manufacturing of diamond goes through four basic stages:
1. Designing and marking
2. Dividing
3. Shaping
4. Faceting and polishing

Designing and marking
Designing is a crucial step in diamond manufacturing. During this stage the size and relative value of the cut stones that the rough will produce are determined. The designer must consider the carat weight, shape, colour, clarity and crystal direction when deciding where to mark the diamond rough for sawing or cleaving. Incorrectly marking a diamond by a fraction of a millimetre can make a difference of thousands of pounds in some cases. In addition, if a designer attempts to cleave a diamond in the wrong position, the diamond could shatter and become worthless. Historically, the cleaving process relied entirely upon human skill and judgement, but now the process is assisted by computer software using a laser mapping technique. This helps a designer to decide where to mark a diamond by indicating different options of yield. When the designer has made a judgement, he or she draws a thin black line in Indian ink or permanent marker to show where the diamond needs to be sawed or cleaved. Some stones are suitable to go straight for polishing; these stones are called ‘makeable’. 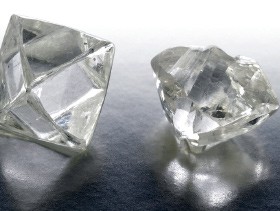 Dividing
The diamond can be divided by the following methods:

Shaping
Bruting forms the basic face-up outline of a round diamond to prepare it for faceting. During the bruting phase the diamond being bruted is spun on a rotating lathe while another diamond is forced against it, gradually forming the rounded outline. Essentially, one diamond is used to shape the other. The amount of pressure required is carefully controlled by the bruter as lack of care can cause small fractures called ‘bearding’ and may affect the clarity of the finished diamond.

Modern bruting is the process whereby two diamonds are set onto spinning axles turning in opposite directions, which are then set to grind against each other to shape each diamond into a round shape. This can also be known as girdling. The direction of rotation changes constantly, with one diamond moving backward and forward. This process is carefully controlled electronically as well as by a supervisor.

Faceting and polishing
Polishing is the final stage of the cutting process, giving the diamond its finished proportions. Three main pieces of equipment are required to facet and finish a diamond:

This step lays the foundation for the potential of the diamond’s performance when it comes to handling light, because it establishes the diamond’s basic symmetry. For a round brilliant diamond the person known as the cross worker gives a pre-form to the diamond by polishing the first 18 facets: the table, four corners and bezel at the crown and then four corners and four pavilion facets and a culet, if any, on the pavilion. The remaining 40 facets are added by someone in the aptly named role of ‘brillianteer’, as 24 on the crown and 16 on the pavilion. It is this stage that will determine how much brilliance and fire a diamond displays. Minor inconsistencies in symmetry and proportions can make the difference between a stunning diamond and a dull, lifeless stone.

Despite new technology being harnessed and developed, the final outcome is still very dependent upon human intervention and judgement. As we all know, every rough diamond is unique, according to how nature created it. Human skill can enhance or detract from the finished, polished diamond adding a further twist to its individuality.